What is the role of a costume designer? How is the costume design process for a film, stage production or television? Why is a costume important? I spoke with four Costume Designers to get their story.

Brînduşa knew downtown Bucharest by heart, since in her youth she used to roam the streets daily in search of costumes. Around the year 2000, they were  hard to find and she had limited choices – a few little stores and the Bucur Obor market. She took photos of them using a film camera and then she showed the clothes to her clients on photo paper.

17 years later, Brînduşa shows costume suggestions to her clients directly from her phone or laptop. Every project starts with the proper research. She searches for references in a database, in online store sites, then she draws sketches or she combines fabrics and accessories. If she doesn’t find the right costumes in the stores, she design them from scratch.

Brînduşa Ioan didn’t know that she would become a Costume Designer, but the inspiration came from her family. Both her parents are artists. She grew up in their studios, around bohemian family friends, and continued to grow in the same atmosphere.

“I was inspired by the teachers, by the way they talked about the costumes, the fabrics they chose for them, but also by how they dressed for class. The school shaped me as an artist, then art history and costume history  taught me how to find references faster when I was researching a particular project. You know what to look for when you have a background. Then, regarding clothes, if you do not take the time to study them, you can be deceived by the people you work with. You need to know what details to pay attention to.”

As a Costume Designer, Brînduşa quickly became accustomed to starting the costume design process from a storyboard, sitting in creative meetings with either an advertising agency or a director, and then going “clothing hunting.” The process is long, but happens very quickly and you have to be ready with everything.

“Working with strangers is thrilling and you don’t get bored. Over time I started to know them, I knew what size they wore, what they needed, what tastes they had. I pay attention. I follow a character and I just complete their story with a costume.”

“It’s hard, but I’ve found something new with every project I have had. I’m surprised by every story and when I don’t need to suggest normal clothes for a project, I spend my nights thinking about sketches and how I would cut the fabrics.”

When the costumes reach the people who wear them, they change according to the evolution of the characters. While during the rehearsals they start by moving shyly, as the actor gets accustomed to the character the clothes start to borrow from his movement.

Brîndușa says that we wear a costume according to our style. We can dress ten different people in the same one  and be surprised that it simply looks different. Each person moves differently, acts differently. It’s a system, different elements communicate with each other. Clothes and colors go well with a decor, with what happens behind a character. The makeup and the hair complete the costume and turn it into a look. And then, to these things that relate to one another, you add the main element – the relationship you have with the people you work with, because together you are building the character and the costume.

“As Costume Designer, I’ve discovered that I need to communicate a lot with people, to stay calm and to not be afraid to ask for help if I can’t find something or if I get stuck in a rabbit hole. And I’ve found that if I will for something to happen, it will happen. Things come to me if I think positive.” 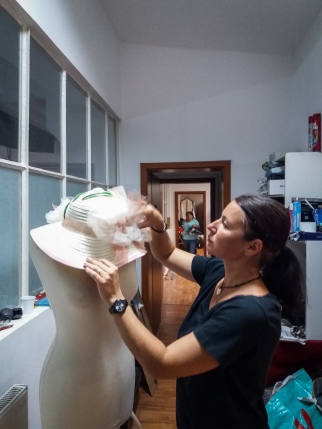