How do you develop a personal style if you have a twin? How important is it for twins to wear the same clothes? I spoke with three pairs of twins to find out about their life, their style, and how they choose their clothes.

Corina and Oana were born in Târgu Jiu, Romania on February 20th, 1991. Their parents didn’t they would be having twins, they expected a boy.

They grew up thinking that it was a normal thing for them to be twins. But when they started to walk around the house, they felt they were getting a lot of attention, sometimes too much of it. “We were always going out with a cousin of ours. She came back home one day and said she would stop joining us because we always got all the attention.” Corina remembers.

Their clothes through time

During their childhood, Corina and Oana wore identical clothes whenever they left the house. Indoors it didn’t matter if their clothes weren’t the same.

“We had costumes made by our grandmother. I remember the elastic skirts and the buttons on our blouses, which we didn’t really like.” Oana says.

“Everyone in our family was gifting us similar clothes. Even though the colors were different, the designs were certainly identical. In school, even though we wore uniforms, we had the same pants and T-shirts underneath them. Only the shoes were different because we could not find the same size. They were probably produced in smaller batches.”

They felt it was natural for them to dress as twins. “Our parents did not force us to dress the same, on the contrary. We chose our clothes and when we wanted to buy something and couldn’t find it in our sizes, we searched everywhere until we did. Our mother had a lot of patience shopping with us.”

Corina and Oana say that their wardrobe was always simple – jeans, blouses, scarves and skirts, or dresses in the fall “We’ve switched to wearing skirts and dresses after twenty years, but we mostly wear them in the Autumn”, Corina says.

“There are things we don’t like. For example fur or leather products. Fur makes you look big, especially from behind, and the leather feels strange on the skin and it doesn’t keep you warm”, Oana says.

They also had moments when all their T-shirts were red, other moments when they bought large, black jackets. From time to time, one of them would ask their parents – “Why did you let us buy something like that?”

In high school the girls went through a phase when they wouldn’t wear the same clothes, nor the same colors. “When it was too obvious that we were twins, we didn’t want to dress the same way, ” Corina recalls.

“We felt the need to be different, but we didn’t purposely decide we were going to dress differently from the next day onward. We just started buying things the other one didn’t have. I think we kept on buying the same blouses, but we were careful not to wear them both the same day“, Oana adds.

They had the same style and they were inseparable, until they got their Master’s degree. Then Oana got married and gave birth to a little boy.

“Even if we don’t live together anymore, we never buy clothes without seeking the other’s advice. Our Whatsapp is full of pictures of us in dressing rooms, followed by that question – Is it okay or not?”

They’ve kept a simple style and they don’t spend too much time shopping. If one of them is looking for jeans, she goes shopping just for jeans. “We still get the same clothes even if we don’t go shopping together anymore. If I get a jacket, I get Oana the same one. It’s part of our relationship. And I think we would feel guilty if we didn’t buy in duplicate”, Corina says.

They both feel that this conversation around their clothes has made them spend more time together, at least on Whatsapp. 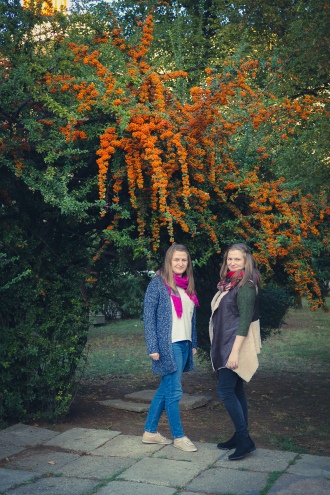 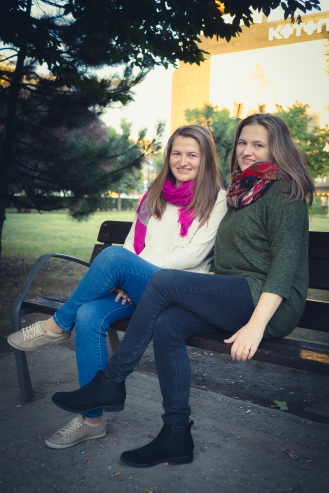