What kind of clothes do dancers wear? Do they use special clothes when they dance? Do the fabrics influence both their body and their movements or not? Does the shape of their costume influence their presence on the stage? I spoke with four dancers to find out what they think about it.

Galea was only seven years old when she would perform contemporary dance moves without even realising it. She recalls a moment when she was wearing a white dress with a cape over it, during a theater play. “I spent my whole childhood wishing I were comfortable with my body and the way it moved, until I realized that dancing was the most beautiful thing that had ever happened to me. Our body is very intelligent if you take the time to train it, if you practice a lot. When I push the limits of my body, I feel joy and I understand what it’s capable of.”

Galea studied choreography in high school and attended the National University of Theatre and Film “I.L. Caragiale” from Bucharest, Romania.

“I discovered contemporary dance during college. I recall the classes I attended in my freshman year, where I was asking myself why people around me danced without making any sense. Over time I realized that I needed to let my body speak out, without any explanation, and I have set it free.”

Some of the items were bought from specialty stores and they were expensive, but they were worth the price. She also acquired items from ballet and sports shops. For her dance shows, the clothes were bought or made according to a scenario and to a budget.

“The fabrics, the colors, the design, they are chosen depending on context, time, space, direction and set design. I’ve been involved in shows with very large budgets and with clothes made by famous designers, but I’ve also danced in shows where we used clothes from our own wardrobe.”

“I recall having a phase where I developed an obsession for a light-yellow blouse. I was wearing it all the time during my workouts, because it was soft and cosy. One my favorite costumes, which I have grown attached to, was part of the “Rebecca” musical. The look was comprised of a jacket and a long skirt below the knees, 40’s style, made from a very soft, green fabric with a flowery design. On my head I wore a hat and had many colorful wigs.”

Galea believes that clothes are important for a show, because they can define a character, time, space, or a social status. But beyond that, the most important thing is for her to feel comfortable in those costumes. She recalls some instances when she was really worried about stepping on a dress or raising a leg too much, because the fabric was so fragile. If a design is too thin for her body or too large, if the costumes don’t have appropriate fabrics, Galea says she can’t concentrate on dancing, rather she’s trying to avoid accidents. A long list of uncomfortable situations regarding costumes came to mind, but this is a story for another time. 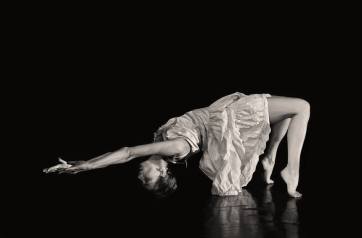